Tax the rich and all our problems will disappear, say a growing number of people. The amount some people earn is truly staggering compared with the bulk of the population. That is true, but would taxing the top 1% more make any real difference? Is there another uncomfortable truth?

There is a game called "The last of us" and in one of the chapters your enemies' enemy becomes your friend. In this section of the game you take cover whilst the two groups kill each other. Once most of them are dead, you then spring into action and clear the few remaining ones off. A parallel to this is occurs in our society. The rich make the less well-off fight amongst one another and they cream off us all, regardless. More about that later.

Firstly, let's look at the scope of taxing the richest more. How much could we potentially raise? 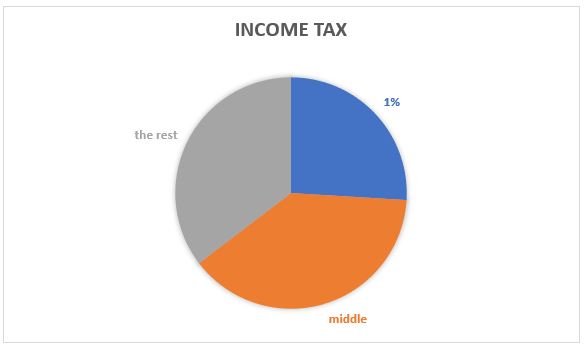 The 1% are paying a fairly large proportion already, but how much more could we extract? 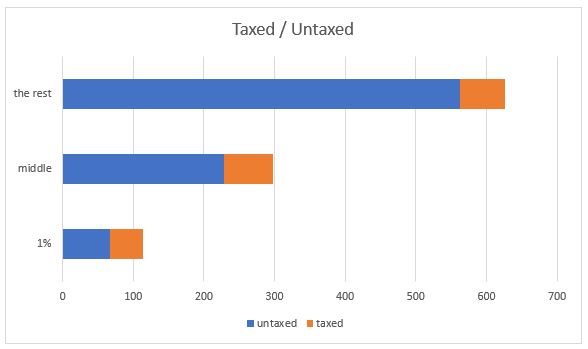 The 1% have £67bn left after paying their tax. This is an average of about £207,000 each. We could tax them at 100% and it would raise another £67bn each year. If we did so, they would not be able to pay any property taxes, taxes on their cars etc, but who is going to mind about that?

If we did indeed tax them at that rate, we could redistribute it. This assumes that they would be happy to pay it and that none of them move out to another country. This would give the other 99% just over £2000 each. Or we could give £4000 to everyone in the bottom half.

A lot of people would accept that taxing them at 100% is unrealistic, so a compromise could be found. Maybe we could raise the rate, say half way from 45% to 72%. This would enable them to live, pay their national insurance and not have to eek out an existence on their savings. However, giving £2000 to everyone in the bottom half, £40 per week is not going to be transformative. I accept that every little bit helps, but is there another solution?

We see that the income of the top 1% has risen from 6% to 14% over that last few decades and home in on that area of disparity thinking that doing something about it will make a huge difference. However, it is not as great as it might seem for there are 99 times as many people to share this wealth with. It simply means your earnings if the same tax is to be collected is just 8% more. And that is if you try and implement ridiculous tax rates to do it.

Sell as much as you can and create an ever-larger turnover seems to be the spirit of many businesses. The "busy fool" is they who sells more and more things but pays no attention to the profit. They end up either just managing to get by or go bust, in part because of the failure to factor in all running costs that spring up all over the place.

Take an example of one item in your store that costs £4 to buy or make. If you reduce the price you sell it at from £6 to £5, your profits are halved. That £1 makes a massive difference to your profitability. To the consumer it is a 17% reduction, but a 50% lowering of profits.

This typifies the problem we have in many a society. Prices reductions are attractive. We all want a bargain but fail to see the impact it has. It is one big merry-go-round. Peter is killing Paul at the petrol station, wanting the lowest price for their fuel. Paul is hurting Susan at the bakery with the demands for lower priced bread. Susan is chasing Steve for the cheapest insurance. Steve is putting a job out to tender hoping to draw the lowest bid. And round it goes, with only the few, those at the top making a decent living.

I know it will never change for we all want a bargain. Many of us seek reduced prices to 'survive'. However, there is a knock-on effect. The more we bargain hunt, the more businesses have to lower their prices. As a result, they make less money, far less and then can't afford to pay their staff as much.

Hotels compete to keep people coming. They lower the price, then look to cut costs. One way is to make you, the worker, do more. Some have had to clean more rooms per shift. No longer twenty minutes per room, but fifteen. Later on down the line this becomes the norm and prices come down even further. Our hunt for cheap means we, the suckers, are doing more for a lower salary.

But what about the rich? Well if you now have to sell twice as many items to make the same profit, it actually benefits them. Before in the £5/6 example you paid a 10% commission to the website company. (Amazon/Ebay/Ebid/booking. com Etc. ) You paid £0.60 per item. Now you are paying 2 x £0.50, which is near enough double. To add insult to injury these large organisations begin to impose rules that are easy to fall foul of. If you do not perform well, according to their metrics, you are kicked off and left high and dry.

Where does the government come into all of this? Well, they not concerned at all. They too get more income as your turnover increases; more sales tax / VAT. You need to achieve a greater turnover for the same profit as before.

Artisan goods and a monopoly

It would be a thankless task trying to persuade people to stop hunting out bargains at every turn. I doubt a government would wish to ban price comparison websites. Even if attitudes changed, companies that make more do not have great form when it comes to paying their staff proportionally more when times are good. Too many characters in the boardroom have taken ever greater slices. A small business owner feels it is they that have put in the most work, took the most risk and invested the greatest amount so therefore are entitled to the bulk of the fruits of any upswing.

When considering a business to start or thoughts turn to how a current one can do better, we can think about selling something that has more apparent value. An artisan product, organic foodstuffs, well designed items that people are far more willing to pay more for, is an answer for some.

Monopolies are hard to come by. Monopolies provide the greatest opportunity to set a price that provides a good profit. However, finding a product or services that no one else can copy is rare. Many people have avoided the temptation to discount what they offer and still stay around. Some have decided to maintain higher margins despite the lower turnover realising that a shorter working week is a good swap for less income.

The rise of the devolping countries.

I have been to China many times on business trips and witnessed something significant. In 2006 the wages of the 'worker' was about £70 a month. By 2010 this had risen to £150 and now it is well in excess of £300 and rising fast. People in developing countries are getting a much bigger share of global wealth. This is leading to a situation 'in the west' where you are now far more likely to be in either one of two camps; a millionaire or on minimum wage. There are less and less people in the middle. This will not change. Unless. Unless we do something unimaginable to restore the imbalance between us and the rest of the world. For far too long we have been enjoying a developed world premium that has been at the expense of the vast numbers in poorer nations. We could cut the internet off from everyone outside the club. We could stop the sale of technology too. This would help to do it. Of course, this is not going to happen, and it is not something many would espouse anyway.

I ask this following simple question over and over and no one answers it. It doesn't even register as relevant to anyone. Maybe you the reader can take it seriously: Why are you getting paid ten times as much for doing the exact same job as someone else in another country?

A mobile phone costs pretty much the same the world over. Cars and many other items are also priced roughly the same too. We believe that rent and house prices are much cheaper in developing countries yet that is not always the case.

The answer is that there is no valid reason why you are getting paid more. And you won't for much longer.

We can put our own country first. If we care more about our country than others, then we make that the priority. We are much less shy about giving support to our own family, support that we are nowhere near as inclined to give to outsiders. Hence such an idea is not without reason.

Here in the UK we could all delete our Facebook, Instagram type accounts and build our own. We could go back to the old buy British campaigns thereby supporting our neighbours and local people. We could copy the likes of the Germans and make high quality long lasting items that stand the test of time. We could also use capitalism to our advantage and borrow solely for investment, not for sofas. Save and spend rather than borrow for things that we soon throw away.

You are no longer just in competition with someone down the road or in another city, but with a whole world or people eager to take a greater share. Jobs can be done by freelancers anywhere. Products can be made and sold direct to the consumer from far afield.

We want greater equality for all, but when it is happening on a global scale, like it is right now, we begin to realise that it has a consequence for those that have had it easy for so long. Thinking that if only we were to tax the rich it would make things alright is a major distraction and a delusion.