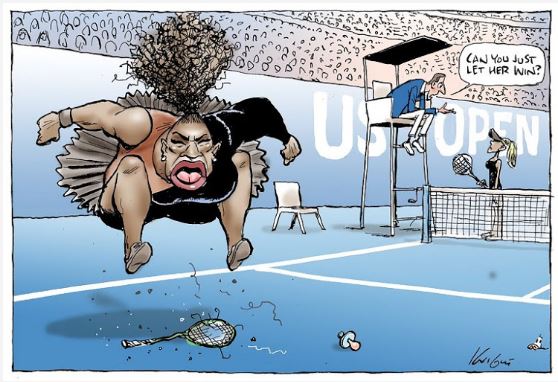 "This image depicts whites as demure and feeble"

"The racism, what with the brown person so prominent and the white blond one as an almost irrelevant figure in the background"

After hunting for something like a tyre repair shop, we begin to notice them everywhere. Likewise, when we become attuned to spot racial, sexist or "inappropriate" commentary we see them in every scene. Those on the lookout for one form of racism will highlight the brown persons stigmatisation. Those that notice anything untoward females will bark out orders to have it corrected.

In times gone by, we would simply have a little chuckle and move on. Now we take every opportunity to push our agenda. And push it above all others. We would never stop and consider that the noise we make drowns out the others that have an equal wish for attention.

If you became a patron of a charity you raise its profile. However, whilst it might lead to more money overall being given to all charities, it can force some to spend more on advertising to keep up. The proportion of money that gets spent on "doing good" can drop.

A burglar notices the properties that are empty and easy to enter. A gardener clocks a selection of trees on their travels. A car enthusiast is drawn to certain marques of cars on the highway. A pedant sees every spelling mistake. The righteous is dismayed by anything that seems immoral to them. We become adept at finding what interests us personally.

When you see a cartoon like the one above it sets of a chain reaction based on past experience and knowledge. And then decide whether to react or not.

In so many respects, we humans are simple beings. All psychological entities are very similar Obsessive "disorders", phobias, fears, anxieties, worries, concerns and so on are not discrete things. All psychological issues have parallels with one another. With some plaguing us to such an extent that we consider them to be a mental health issue. The truth is that a set of links in our mind are not organised in a way that we would like.