They just seemed wrong from the outset. "Just keep wearing them" they said over and over as if by magic you will either disappear, give up, buy elsewhere or fade away. Having worn glasses for many decades I am familiar with the odd effects you get when you have a new prescription and new frames, but this was markedly different.

My little story began when I began to fully acknowledge that I needed an eye test and expected a slight deterioration in my eyesight. New blended lens, varifocals were suggested. When I first put them on, they didn't seem right at all. The "you will get used to them" mantra began. The trouble was that I couldn't use the computer, nor drive with them. I couldn't even sit and watch the TV with them on.

So back to Scrivens I went. I tried in vain to explain that only a small portion of the field of view was in focus. To see something clearly, straight ahead, I had to turn my head a little to the right. I fully understood that things below the sight line would be blurred for that is the reading / near view section, but surely all things left, and right would be sharp and true? This image gives you a rough impression of what it felt like. 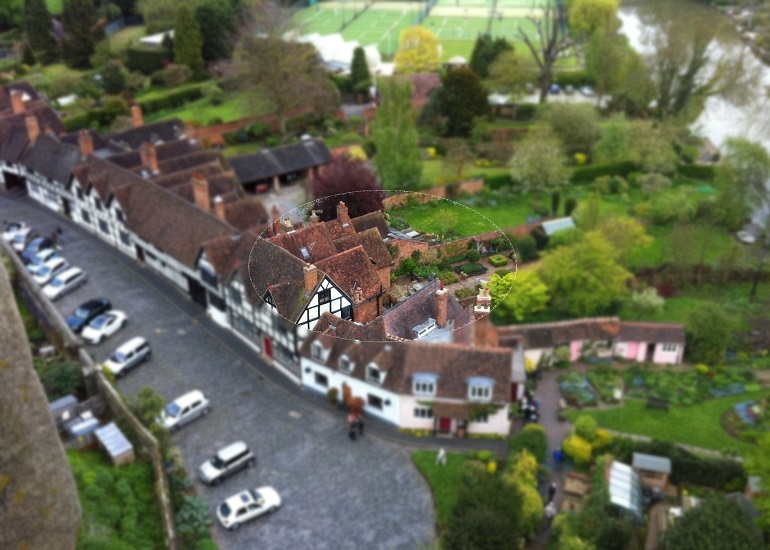 Reading was much the same, just some of the text in focus. I had to move my head from side to side to read.

"You will get used to them" over again. Upon my fourth return visit I insisted that these are no good. The double vision when looking at a car number plate etc is just not safe.

I opted for a couple of standard pairs of glasses casting these varifocal ones aside. Problem solved and no extra was to be charged, so good that I had an opportunity to try them. Except that was just the beginning of major trouble and the intransigence. Everyone is wrong except the store manager.

One pair was plain awful, the other not too bad not too brilliant. I did indeed heed the suggestion to wear them and 'get used to them'. Alas a perturbing pain/irritation began with my right eye. One that persisted for several days after returning to my old former glasses. It is what some describe as eye pulling.

Frustration, exasperation and loss of belief in things of this world began. Off to vision express and see what they have to say.

A recheck by the optician showed a slight difference in the prescription but that is normal as it can vary throughout the day. The main point was that the optician was flummoxed. They could not offer up any explanation as to why these glasses bought from the other shop were causing the issues I was experiencing.

I decided to buy a pair from them and see what happens. In the process the girl at the desk put me on track to uncover the blunder. She said the pupil distance seemed a little off and could be the problem. Two people in the shop, patient, tolerant, fine people marked and checked the pen marking of where the pupil centres should be.

So, it is all about pupil distance then. Not. Not at all. The journey towards an answer was much more involved and probing than that.

A few days later I returned to vision express hoping for something great. Great it wasn't. It was unbelievably good. It now was like having 4K, 8K vision. The clarity was something to behold. Out where I live in the countryside, I could see details in the yonder crystal clear. Pin sharp. 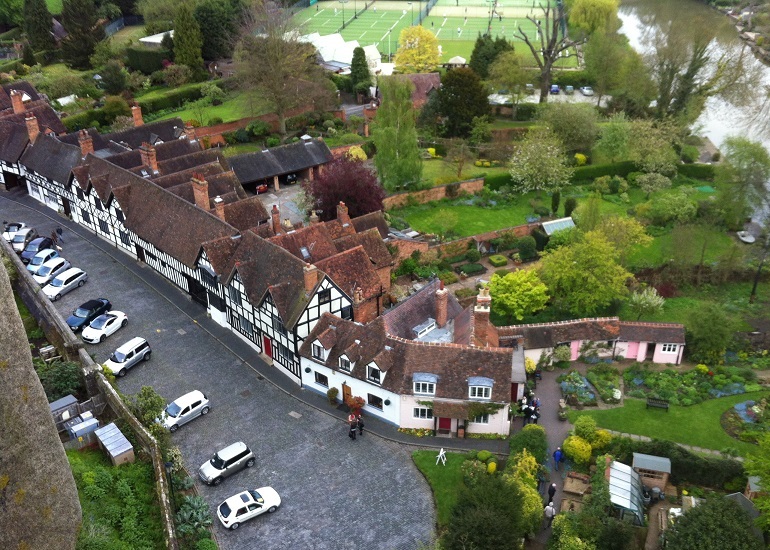 Now I had to return to where I got those 2 pairs of glasses and get a refund. What I really wanted was an admission that they had made them wrongly. What ensued was months of argument and disagreement. I had asked vision express to put pen marks on the glasses, glasses that had nothing to do with them to show that the pupil distances were out of tolerance. 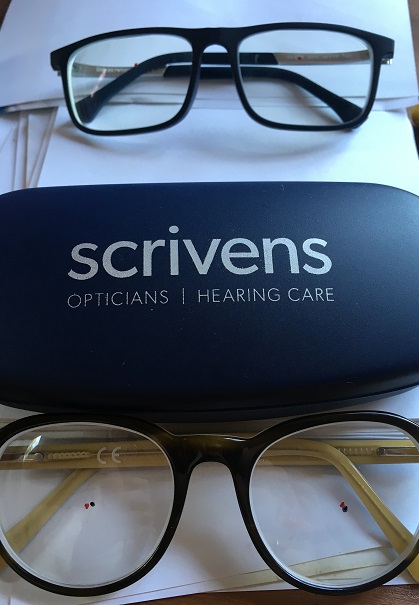 I received a confirmation that the marks made were right by a worker in Scrivens but was asked to return when the manager was in. Back I went and she used the lensometer to put new marks on - black ones. See picture above. I see this as an act of fraud. To cut a long story short no refund was forthcoming. The glasses were deemed fine and because I didn't wear them for long enough to get used to them it was my fault. "Ok so I am wrong, 2 people at vision express are wrong and only you are right. "

Maybe an email to head office will may be more fruitful. Alas after waiting 10 working days, yes 10 working days I get a standard response. Refund? Not a chance. We sell a lot of product through amazon and are obliged to answer questions within 24 hours else we get thrown off the platform. Seems to me we earn money by being committed to sorting customer problems pronto, here they earn by fobbing people off.

I took an online course for glasses dispensers and encountered something called the Prentice rule. More on that shortly. What I hadn't mentioned earlier is that alongside the normal glasses I ordered some reading glasses too. Another dismissal to my claim that there was something wrong with the glasses was that "if the reading glasses are ok then the other glasses will be too'. This is utter nonsense. It is equivalent to saying that if your BMW is driving fine the your Mercedes will be as well. No, no, no. The centring applies to the individual frame not the prescription. This is important.

I put my hands up to not checking the prescription properly when using the Prentice rule to demonstrate the glasses were made outside of the tolerance based on the reading glasses diopter. +1 is an addition not an absolute value. So, with a -4 diopter the reading glasses are -3. Irrespective the 1 difference is magnification will push it outside of the acceptable scope.

The Prentice rule shows that the higher the diopter the smaller the usable section of the lens you have. Anyone who has say -1, -2 diopter will have a 'huge' margin of acceptable error. If your prescription is -3, -4 or above it is much more significant. Each diopter halves the portion of usable lens area.

The upshot is this. They made the glasses with the correct pupil distance. However, the decentration was bad. Really bad. The centre of the lens did not match the centre of the pupils, far from it. On one pair they were 8mm too high and the other the right lens was low and right of the best point.

After all of this you may want to know that it is real simple. It is blindingly obvious. If you want to check your lenses, give an optician a few pounds and ask them to put centre dots on them for you. I bought a lensometer to explore the subject, but this is a bit excessive. With the frame fitting your face nicely look straight ahead into a mirror. The dots should be bang on in the centre of your pupils. If not, then they are going to cause you serious problems if your prescription is more than +2 or -2. It won't be much of a problem if just -1. If like me, it is -4 then having the dots dead centre is vital. 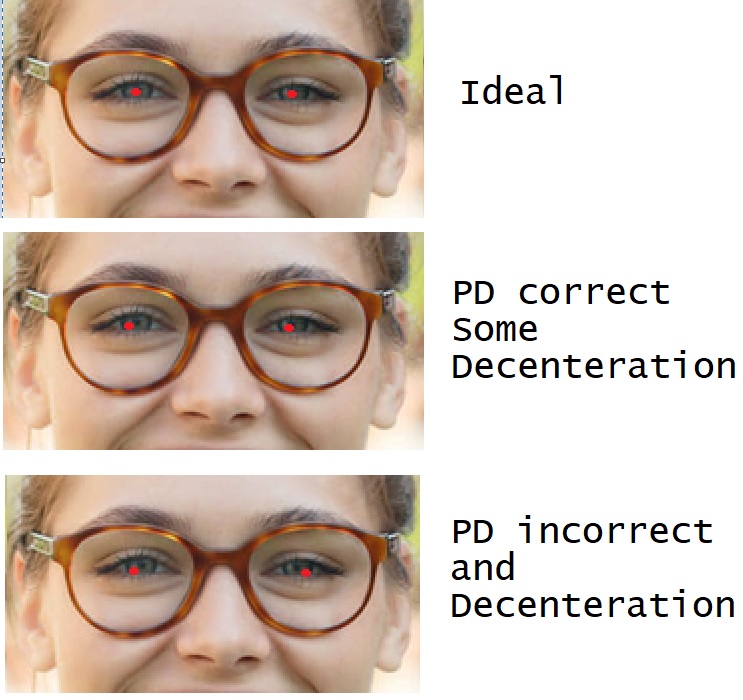 So, what happened? On one occasion when I mentioned that the right eye was blurry to the left of vision I got "ok but what about when you have both eyes open". I could swear, I could get angry. Instead I said listen "I am getting more sense from that brick wall than for you people here. I asked to speak to the optician, and I got this twice "why do you want to see them, there is nothing wrong with those glasses"

Most people would not take this level of belittlement. Believe me I have not had an issue with any retailer for 15 years, the last was with Comet. After another battle with the optician the words appeared; "oh yes they are too high, and those are out at well". I sort of got a refund for 1 pair and just put it all down to being unlucky.

Do you get used to glasses? Yes, in most cases. Things seem closer or further away for a few days. The ground can seem like it is unlevel or coming up towards you. This settles down after a few days. All new glasses however should be clear in every direction. All should be in focus.

It is difficult when the majority of customers will not be affected by badly centred lens. You have an optician who is only involved with the prescription and doesn't mark the lens for manufacture, that is done by another less qualified person in the shop. They have great equipment to measure the pupil distance, but if the decenteration (off-centredness) is too great, pupil distance plays no part. Marking the centre with a pen with the glasses on is a difficult job. It is a pathetic method. A tool to make this more accurate would eliminate the problems.