Q When is a gate a road?

When a leaflet produced by the government says so. 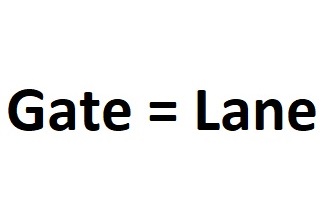 In the middle of the road before me laid the words BUS GATE. With no other route to take we went 'through' this gate and consequently got a bus lane penalty charge notice. I was about to pay it then changed my mind and decided to contest it. Afterall a gate is not a lane. Or is it? The concept of a gate is something that is openable and sits between a fence or wall. A gate is something that you pass through, but not walk or drive on. A gate is also a controlling mechanism to allow and disbar things. Gates are also found in electronics for such purposes.

The council had their definition: "It is a virtual line across the carriageway". This seems fine as that is not on the same plane as the road. However, the adjudicator insisted that a bus gate is a section of road. They read a document, namely the TSRGD which mentions bus gates as being roads for buses only. The fun part to all of this is that the first paragraph of this TSRGD circular distributed by the department for transport reads; "This Circular is aimed at traffic signs practitioners and others with responsibility for traffic management. " So, I am to know what these two words used in conjunction with one another is meant to mean by referring to a document not aimed at the general public.

A gate seems far removed from an area of road.

Our language does have its oddities. A cup and a board together makes a piece of furniture to store things. I am sure you can put a wide range of two words together and give it a meaning that you could not derive from the meaning of the individual words. Forget semantics, for we need to simply learn a myriad of odd concepts that arise from pairing up unrelated words. A 'bus lane' makes a lot of sense for it implies that it is a road/lane. Whereas a bus gate has no barrier, no system of control, no bolt, no hinge and is not vertically mounted but flat on the ground.

There are advantages to being neat and tidy, but sometimes it extends too far.